Bishop of the Diocese 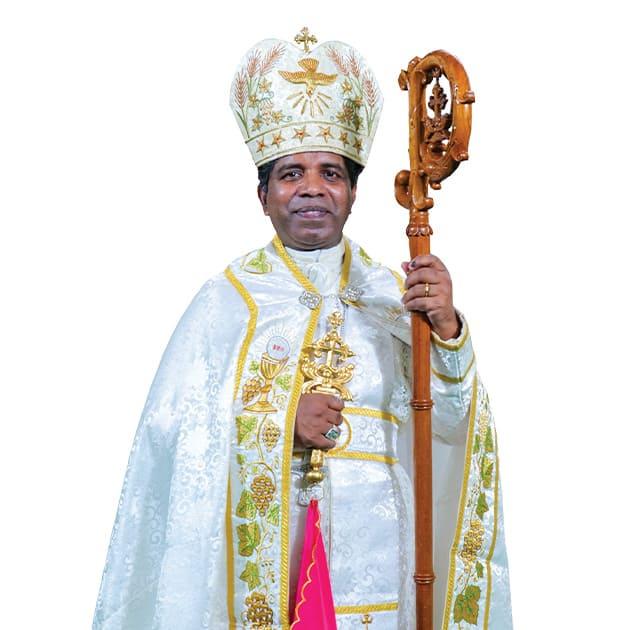 Bp. George Rajendran was born to Mr Kuttinadar Thomas and Mrs Omana Mary on 14 April 1968 at Padanthalumoodu, Kanyakumari district, Tamilnadu, India. He is the second of the four children that the couple was blessed with. He has an elder brother named Selvaraj, a younger brother called Paulraj and a younger sister Sheela. Rajendran was about 10 years old when his mother faced trials of various kinds. She found joy, peace and tranquillity in the company of some good Catholics who took her to the Catholic Church for worship. This led her eventually to accept the Catholic faith. The OMMI Sisters prepared the family to receive Baptism. Rajendran was baptized and given the name George on 14 March 1980.

After his baptism, Rajendran was involved in all the church activities of his home parish, Sacred Heart Church, Padanthalumoodu.  He was fond of serving at the altar. Since there were only two vestments available for the altar servers the two who reached the sacristy first would become eligible to serve at the Eucharist.  Rajendran was invariably the first to reach the Church in the morning.

Having been living close to the priests and religious in the parish and realising their dedicated ministry to God and the poor, Rajendran felt a special call to serve God and the poor as a priest. With the guidance of Rev. Fr. Joseph Karimpallil (parish priest), his mender, in June 1990, after his Higher Secondary Education, Rajendran attended a vocation camp at Don Bosco, Vaduthala, Kerala along with 15 boys. He was invited to join the Salesian province of Guwahati or Kolkata. Fr Joseph Karimpallil, suggested to him to leave for Guwahati - a mission territory - so that his desire to be a missionary would be fulfilled.

On 11 July 1990, Rajendran reached the Salesian Provincial House at Guwahati. He soon began his training for his religious, missionary and priestly life in the Aspirantate at the Salesian Training Centre (STC), Shillong. At the same time, he also completed ITI Course in Electronics at Don Bosco Technical School, Shillong. After a six-month-long immediate preparation for Novitiate, he came to Sunnyside, Upper Shillong towards the end of May 1993. In the following year, he made his first profession in the Salesian Congregation on 23 May 1994. The study of Philosophy was at Divyadhan, Nasik(Maharashtra). Back in Shillong, he graduated in Geology at St. Anthony's College. 'Mingling with students and companions from various tribal backgrounds was a unique experience which has stood me in good stead' - he recalls!

Brother Rajendran enjoyed a yearlong teaching experience at Savio Juniorate (Mawlai, Shillong) where there were about 190 boys preparing for their Salesian life. From 2000 to 2003, he studied theology at Sacred Heart Theo. College, Mawlai, Shillong to acquire the necessary knowledge of the doctrines of the Church. It was here that he learned the power of prayer and the need to be close to God. His Sunday ministry in the villages and among the children suffering from rickets taught him important lessons in pastoral ministry and enabled him to increase his love for the poor. Deacon Rajendran was ordained a priest on 29 December 2003 at Sacred Heart Church, Padanthalumudu by Mar George Alencherry, the then Bishop of the Eparchy of Thuckalay in Tamilnadu. The motto chosen during the priestly ordination-"He has done great things for me" (Lk 2:49) - had a particular significance given the nature of his journey to priesthood. From the very start of his priestly ministry, he felt that Mother Mary was accompanying him!

In February 2004 the superiors appointed him as the Assistant Headmaster at Don Bosco School, Guwahati. Being associated with some 2000 children, their parents, and the teaching staff was a rich experience. In March 2006, Fr Rajendran was transferred to Savio Juniorate - the Salesian Apostolic School in Shillong. After a brief stay there as a counsellor, in January 2007, Fr Rajendran was appointed Vice Rector and Vice Principal of St Anthony's Higher Secondary School, Shillong. After three years, in June 2010, he became the Principal of St Anthony's Higher Secondary School. A year later, in August 2011, he was appointed Rector of the School. As Rector, he had the additional duty of guiding the student brothers in their Salesian life at the Salesian Training Center (STC). It was while carrying out this ministry at St. Anthony's School that on 24 August 2012, Fr Rajendran was nominated as the Bishop of the Eparchy of Thuckalay. The Episcopal ordination was held on 16 September 2012.  In the court of arms, Mgr. George Rajendran has the motto 'With God, all things are possible (Mt 19:26)'.  Bishop Rajendran repeats that he ever feels a great debt of gratitude to all his superiors who accompanied him during his journey to the priesthood and now to his Episcopal ministry!