THE EPARCHY – A BRIEF HISTORY

Patroness: Holy Mary, Mother of Christ and Image of the Church

The Eparchy of Thuckalay was established by the Papal Bull “Apud Indorum” on 11 November 1996. It was bifurcated from the Archdiocese of Changanacherry and its area consists of the terriotiry that was extended to the State of Tamilnadu. The then Vicar General of the Archdiocese of Changanacherry Rev. Fr George Alencherry was appointed the first bishop of the new Eparchy. The establishment of the Eparchy and the appointment of its first Bishop were promulgated on 18 December 1996. Rev. Fr George Alencherry was ordained Bishop on 2 February 1997. His Excellency Mar George Alencherry worked as the first Bishop of Thuckalay from 1997 to 2011. On 26 May, he was elected the Major Archbishop of the Syro Malabar Church. When the See was vacant, 2011-2012, Very Rev. Mongs. Philip Kodiyanthara was appointed Eparchial Administrator by the Major Archbishop George Alencherry. The present bishop of the Eparchy is Mar George Rajendran sdb. His appointment was announced on 24 August 2012 from Rome as well from Syro-Malabar Curia, Kakanadu, Ernakulum and his Episcopal Ordination and Installation was held on 16 September 2012. The total number of the Catholicsin the Eparchy is 30,130.

Thuckalay, the Eparchial Seat, is the erstwhile capital of the Thiruvithamcore state. At present, it lies in the municipal town of Padmanabhapuram, 55 kilometres south of the international Airport, Thiruvananthapuram (capital of the state of Kerala), and 35 k.m. northwest of kanyakumari in the southern tip of India.

Area of the Eparchy

The Eparchy was granted jurisdiction over the whole Kanyakumari District and the Taluk of Shenkottai in Tirunelveli District. Total area was 1793.94 sq. Kms. Kanyakumari is the southernmost part of India. This District was formerly a part of Thirukkochi State. On 1 November 1956, Kannyakumari was separated from Kerala and added to Tamilnadu State. The main language of this place is Tamil, but some people speak Malayalam. The Eparchy conducts the Liturgy in Tamil language. Pope Francis extended the territory of the Eparchy of Thuckalay, on 09 October 2017 by including the entire civil districts of Thirunelveli, Thoothukudi, Ramanathapuram, Viruthunagar, Sivagangai, Theni and Madurai. After the extension of the territory, the total area is now 32,374 sq.kms.

There are some historically important places and tourist spots in the District of Kannyakumari.

The Syro-Malabar Church traces its origin to St Thomas, the Apostle, who, according to tradition, came to India in 52 AD. Its members are called St Thomas Christians. It is one of the four Oriental Churches that have adopted the East Syrian Liturgical tradition. The other Churches are those of Edessa, Seleucia-Ctesiphon and Persia. On account of this common heritage, the Syro-Malabar Church continued its hierarchical relations with the Chaldean Church under the Catholicate of Seleucia-Ctesiphon. In the 16th century the Portuguese came to India and the Latin missionaries, who came with them suspecting the St Thomas Christians to be heretical, began to Latinize them. Hierarchically, they were brought under the jurisdiction of Latin Bishops.

In 1653, the famous ‘Coonan Cross Declaration’ took place at Mattanchery, where the St Thomas Christians took the oath not to obey the Latin Bishops. This was the starting point of division among the Christians who were till then one Church. Further events helped many Christians to come in communion with the Pope while others stood firm in their opposition to the Portuguese. Eventually, those Christians who pledged their allegiance to the Pope came to be known as the Syro-Malabar Church. Those who continued their opposition to the Portuguese tried to have Bishops from the Oriental Churches. They came in contact with the Jacobite Patriarch and eventually became Jacobites, of which a fraction was reunited to the Catholic Church in 1930 and is now known as the Syro-Malankara Church. After 230 years living under the jurisdiction of the Latin Bishops, the Syro-Malabar Hierarchy was established in India.

As the Code of Canon Law of the Eastern Churches was promulgated in 1990, it became necessary to rectify the anomaly in the structure of the Eastern Churches like the Syro-Malabar Church. Hence, on 16 December 1992, Pope John Paul II raised the Syro-Malabar Church to the status of a Major Archiepiscopal Sui Juris Church with the see of Ernakulam-Angamaly. The powers of the Major Archbishop were temporarily invested with Mar Abraham Kattumana, a special delegate of the Roman Pontiff.

Mar George Alencherry, the first Bishop of Thuckalay Diocese, was elected the Major Archbishop on 26 May 2011 after the death of Cardinal Varkey Vithayathil and was made Cardinal on 18 February 2012.

HISTORY OF THE EPARCHY OF THUCKALAY

On 29 April 1955, Pope Pius XII through the Bull Multorum Fidelium extended the territory of the Diocese of Changanacherry beyond the River Pamba in Kerala up to Kanyakumari, the southernmost boundary of India. The Bishop of Changanacherry sent priests to pastor the Syro-Malabar faithful who had settled in different parts of the extended area. Among the parishes and mission stations that these priests opened include Arukani, Pathukani, Netta, Penu and Anamukham in the district of Kanyakumari. The faithful of these Centres were mainly Syro-Malabar Catholics who had migrated from Central Kerala.

From 1960 onwards priests from the Archdiocese of Changanacherry began direct evangelization in Kanyakumari. As a result of their missionary work, many people embraced Catholic faith. The missionaries trained these new Catholics in Syro-Malabar Liturgy and spirituality. Eventually, parishes and mission stations were opened in Vilavancode and Kalkulam Taluks in the district of Kanyakumari.

From 1967 onwards the priests from the Congregation of Mary Immaculate (CMI) also joined in the mission work in Kanyakumari District. The religious Sisters belonging to different congregations opened convents in order to support the priests in their mission work. The Sacred Heart Sisters opened the first convent in 1965 at Manjalummood, which was later shifted to Mukkoottukai.

The Bishops who contributed to the mission work in Kanyakumari district up to the establishment of the Eaparchy are Archbishiop Mar Mathew Kavukatt, Archbishop Mar Antony Padiyara and Archbishop Mar Joseph Powathil.

When Kanyakumari district remained a mission territory under the Archdiocese of Changanacherry no mission work was taken up in the Taluk of Shenkottai in the district of Tirunelveli, although it was also part of the extended territory of the Archdiocse. However, the Missionary Congregation of the Blessed Sacraments (MCBS) opened a house just few years before the establishment of the Eparchy of Thuckalay.

After the establishment of the Eparchy, in 1997 the Bishop sent Rev. Fr Thomas Muttathukunnel, Protosyncellus, together with Rev. Fr Philip Kodiyanthara and Rev. Fr Philip Vaikkathukaran to Shenkottai to explore the possibilities of the mission work in Shenkottai. As per their suggesion, the Bishop decided to send two priests,namely. Rev. Fr Mathew Kuzhinjalil and Rev. Fr Peter Kizhakkeyil to Shenkottai to begin a Mission.

Shenkottai is situated 160 kilometers from Thuckalay. On 10 August 1997, Fr Mathew Kuzhinjalil started his work in a rented house at Puliyarai. This village is 8 kilometers away from the town. On 5 September of the same year, Fr Peter Kizhakkeyil joined him for mission work. He too lived with Fr Mathew Kuzhinjalil. On 30 January 1999, first baptism was administered to a grown up lady. Some Catholic families also were there. At present, there are ten priests working in the area - three diocesan priests and seven MCBS priests. There are five mission stations with churches and 3 mission centres in Shenkottai Region.

MISSION IN THE EXTENDED TERRITORY 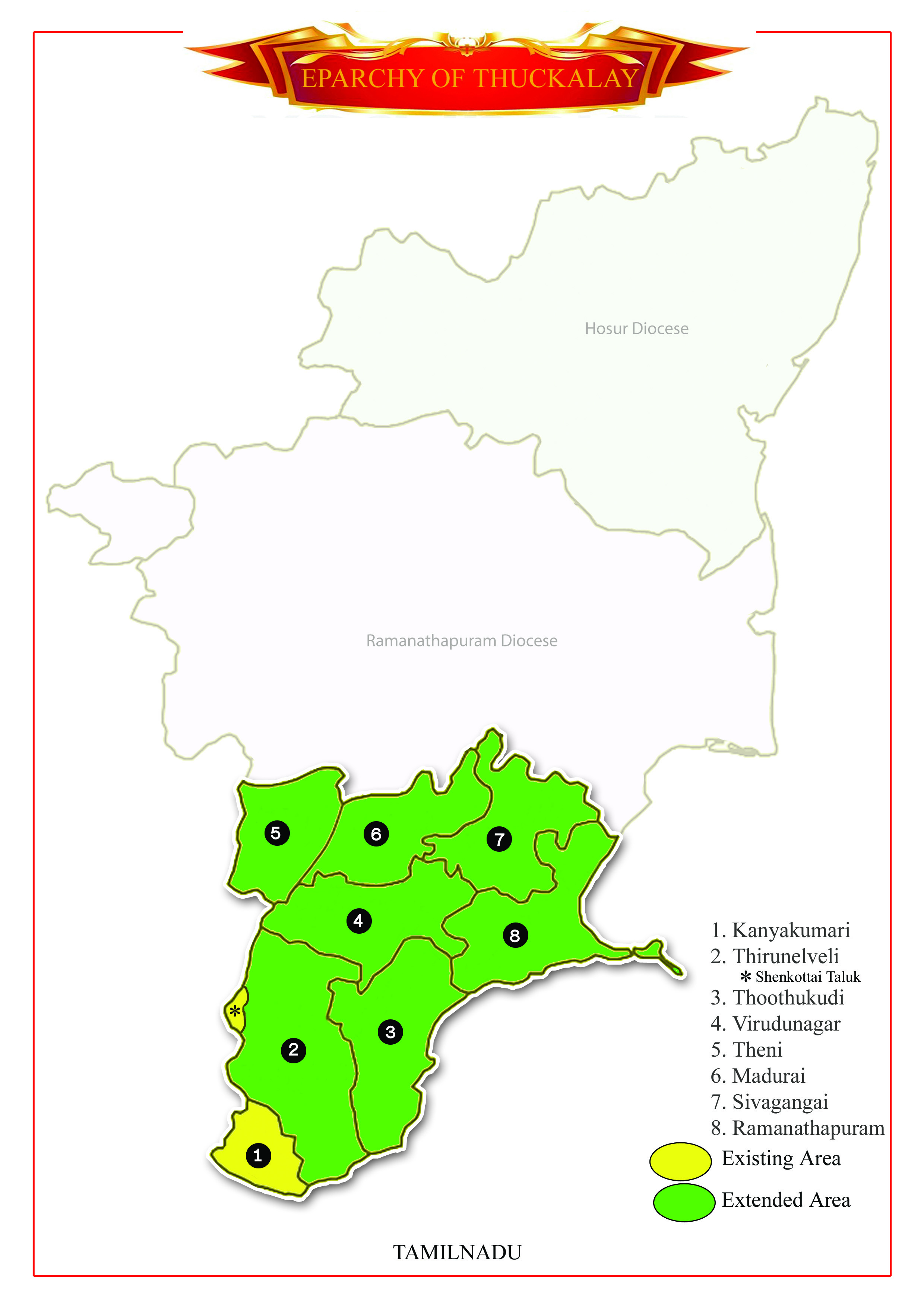