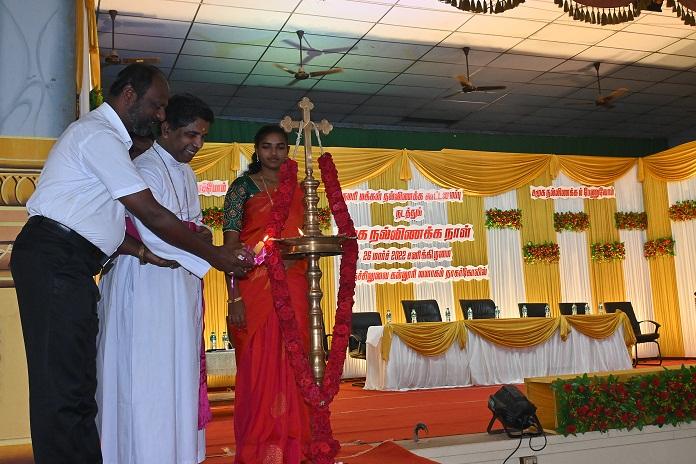 The executive members of TNPCRI participated in the TNBC meeting held on 3 March 2022 to discuss the unfortunate incident in Michaelpatti. Rev. Sr Paula, Superior General of the Congregation of Immaculate Heart of Mary, narrated the incidents that happened after the death of the school girl till the release of Rev. Sr Sahaya Mary, hostel warden on bail. The Bishops discussed how to react to the rising intolerance and atrocities against Christians in some parts of the country. It was decided to observe a Samuga Nallinakka Naal (Social Harmony Day) at the Diocesan levels on 26 March 2022 to explain to the society that the Catholic institutions do not involve in any forced religious conversions. TNPCRI was requested to cooperate with the Diocesan Bishops to organize the day effectively. The four Dioceses of Kanyakumari district came together on 26 March 2022 and held a public program at Holy Cross Auditorium, Nagercoil. The representatives involving faithful, priests, CRI members and people belonging to other faiths and denominations participated in the program. There were nearly 1500 people at the function. Our Diocese was represented by 100 lay persons, 20 religious Sisters and all the Fathers. The key persons who spoke on the importance of social harmony were Mr. T. Mano Thangaraj, Minister of Information and Technology, Mr. R Mahesh, Mayor of Nagercoil, Ayya Balaprajapathi, Mr. S Noormuhamad, former MLA and Mr. Vanni Arasu from Viduthalai Chiruthai Kadchi.